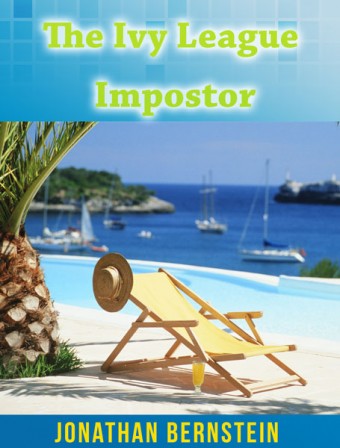 Featuring an all star cast including:

In this comedic novel set on the Princeton University campus, I explore great stuff like: privilege, love, sex and religion.

This faux-memoir is told by Thurston Green – your typical party-going Princeton University sophomore. What makes Thurston unique is that he’s not actually a college student at all.

Arriving on campus to drop off a package, Thurston finds an inviting world of privilege and transforms himself from delivery man into a popular undergraduate student.

As Thurston searches for love and sex at Princeton, he befriends a range of brilliant students, from orthodox Jews to WASPs, from bookish loners to sex therapist Dr. Ruth. Attracted to his charming, boyish demeanor, these new friends confide in Thurston, revealing their own secrets, deceptions and romantic struggles.

In this funny, out-of-the-box guide to making it in the Ivy League, follow Thurston’s coming of age journey to become worthy of the fraudulent life he manages to carve out for himself in the Ivy League.

“Every college deserves a signature novel, and this novel chooses the mythical “Princeton” University of New Jersey…this book is the ultimate college fantasy. Reading Bernstein’s pseudo-autobiography of Thurston Green will skewer every ideal you’ve ever had of what an Ivy League education is really all about.” – Dan Oren, author of Joining the Club: A History of Jews and Yale

“I read The Ivy League Impostor in one sitting because I was smiling and laughing too much to put it down. I loved Thurston’s humble brags and his oddball parenthetical statements. Even though his life at Princeton is a web of lies, you’ll be rooting for him almost immediately” – 5 Stars

“Bernstein takes aim at the Ivy League and hilariously lampoons academic elitism. This book is “This Side of Paradise” for the modern age. Highly recommend. Great for book clubs.” – 5 Stars